The evolution of the East Asian monsoon (EAM) in the geologic time is of great importance to our understanding of the global climate system. However, variations in the monsoon rainfall and the upper ocean thermal gradient are not well understood in the South China Sea (SCS) during the middle to late Miocene. Here, we present δ18O and Mg/Ca-derived temperature records of the surface and subsurface waters from International Ocean Discovery Program (IODP) Site U1501, and use them to reconstruct the upper ocean thermal structure, which reflects changes in the East Asian summer monsoon (EASM) in the SCS over 13.6-7.3 Ma. The differences between the surface and thermocline records (δ18Osurface-thermocline and Tsurface-thermocline) indicate a shallower thermocline and increased thermal gradient between the surface and subsurface waters, implying that upper water mixing was weaker during 9.4-7.3 Ma, which may relate to an increased EASM rainfall. Changes in the local seawater δ18Oseawater (δ18OSW) of U1501 also suggest a decrease in the intensity of the EASM rainfall during 13.6-10.2 Ma and an increase during 10.2-7.3 Ma. From the perspectives of moisture supply and general circulation, the initial formation of the western Pacific warm pool (WPWP) and uplift of Tibetan Plateau essentially influenced the variations in the EASM during the middle to late Miocene. 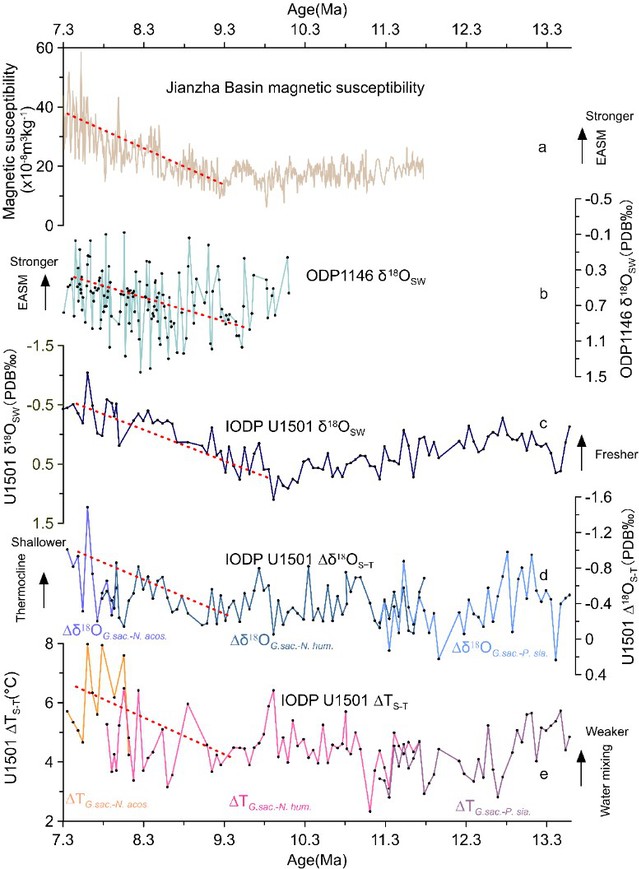