Silicate weathering plays a key role in maintaining a habitable climate on Earth. Although the climate-weathering link has been verified by observations on river geochemistry and weathering profiles, it remains a big challenge to quantify this link in the geological past mainly because sedimentary records of weathering intensity are complicated by other factors such as tectonics, sediment provenance and sorting effects. To clarify the climate dependence of weathering on different spatial and temporal scales, 4 Myr weathering intensity records determined by Chemical Index of Alteration (CIA), are compiled from 12 sites along the East and Southeast Asian margins ranging from ca. 10°N to 40°N. All the CIA records show overall decreasing trends, corresponding to global cooling. The CIA stacks that indicate regional and continental-scale weathering intensity are produced by binning and averaging the CIA data from each site. To explore the weathering intensity-temperature relationship, literature data on sea surface temperature (SST) anomaly are presented for the paleo-temperature changes at comparable latitudes. The results show that the decrease in CIA stack since 4 Ma is larger in East Asia (71-82 in Pliocene down to ca. 62 in late Quaternary) than in Southeast Asia (73-75 in Pliocene to ca. 72 in late Quaternary), in part due to the amplified midlatitude cooling. The correlation analyses indicate the temperature sensitivity of stacked CIA record in Southeast Asia (ca. 0.8 CIA units/°C) is consistent with modern observations of surface soils and river sediments. In comparison, the response of weathering intensity to temperature change is more sensitive in East Asia, with a magnitude of ca. 2.4 CIA units/°C, which may relate to dynamic source-to-sink processes and weathering regime changes. This study provides the first observation on silicate weathering responses to temperature changes at various latitudes since the Pliocene, showing the similar responses, but with different magnitudes. Our findings provide new insights on continental weathering mechanism and late Cenozoic cooling. 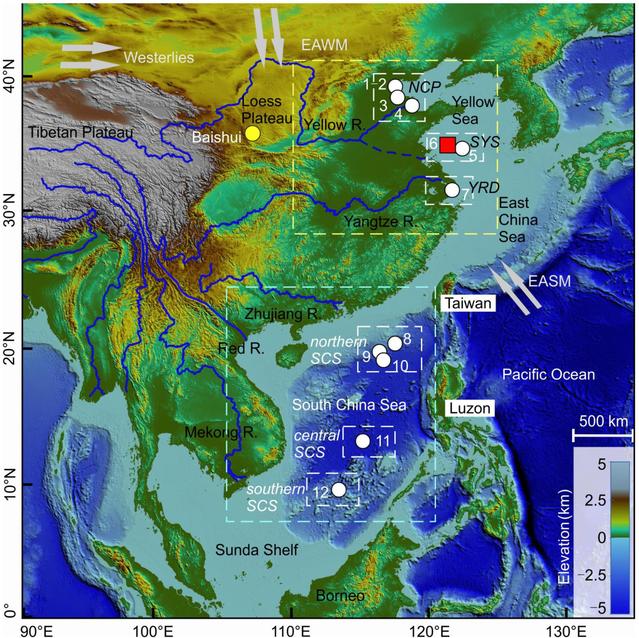